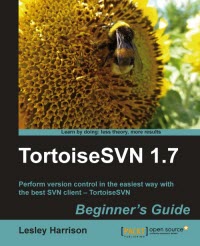 Full disclosure: I was asked to review the book, which I did. And I'm mentioned as a reviewer in the book! So I had to write something about it here since I was never mentioned in a book before :). But as you can see from the review link, I didn't get paid for this apart from a copy of the book and one book of my choice.

I had to point out quite a few mistakes (not talking about spelling or gramar mistakes here) while reviewing it, and they all got fixed quite nicely. Apart from one thing: during the review I repeatedly pointed out that TortoiseSVN will very soon get a new major release (version 1.7) and that the book should be about that 1.7 version, and not about version 1.6 (as it was named back then TortoiseSVN 1.6 Beginner's Guide). Well, they did listen, kind of: they changed the book title, but the book content is still about TortoiseSVN 1.6 — so all the screenshots and descriptions still are about the current TortoiseSVN versions.

But apart from that, the book is very well written and easy to follow. Of course I'm not a beginner anymore and can't really judge that. But with the detailed introductions about the copy-modify-merge model (not too detailed, just enough to understand the basics), how to install TortoiseSVN (something I always thought doesn't need a lot of explaining, but that's maybe just me) and the basic operations a user has to do with TortoiseSVN like committing changes and reviewing changes with the log dialog, I'm sure that beginners can follow it quite well.

In later chapters the book covers how to resolve the different kinds of conflicts that can occur. With a lot of examples the user is guided through all steps necessary to solve such issues.

Other things the book covers are (among many others which I don't mention here):

Of course, the book also covers how you can set up your own server with Subversion (svnserve and Apache), even though that's not really about TortoiseSVN anymore.

The book can be ordered from here.